A Brief Description of the Armorial Bearings based on an Investigation by the College of Arms in June 1978.

Second Quartering (top middle). Arms of William Darrell of Littlecote, registered in the 19C. Blazoned: “Azure a lion rampant gold crowned and within a bordure argent”. 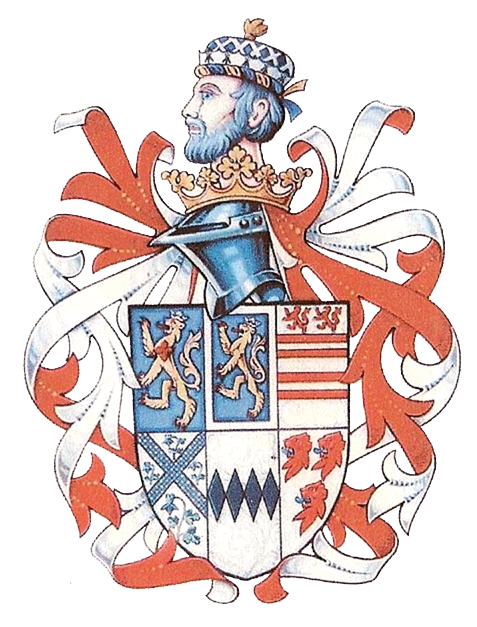 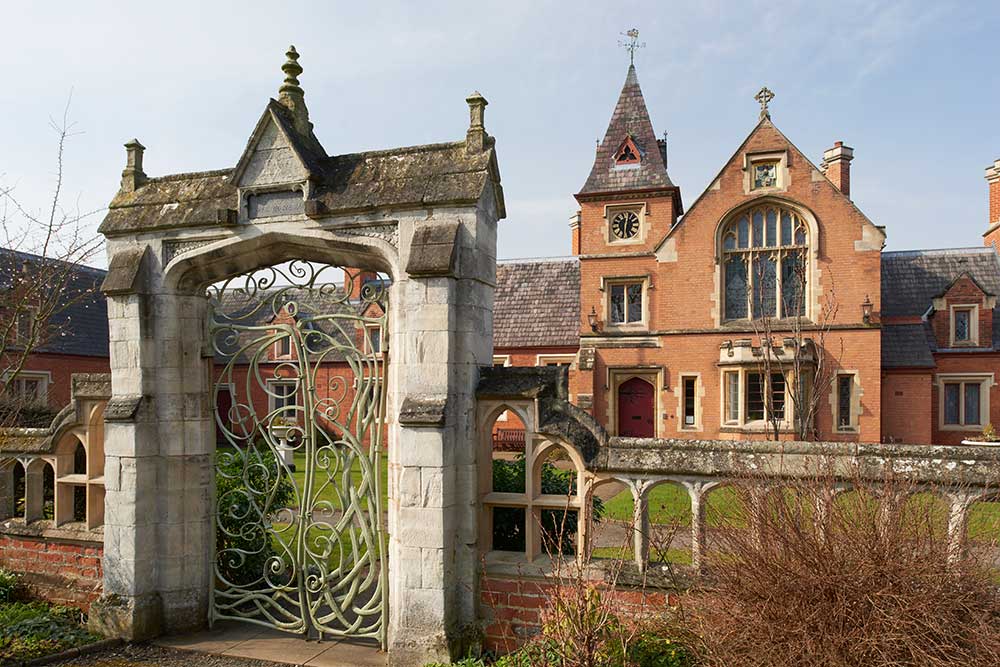 In January 1995 the Master Governor commissioned Chris Topp, Blacksmith, of Carlton Husthwaite, Thirsk, North Yorkshire to make a pair of gates to fit the stone archway in the middle of the dividing wall between the almshouses and the front garden area.

Mr Topp developed and set out the design for the gates from ideas put forward by the Master Governor and the Bailiff. The gates were finished and hung on the Epiphany Feast 1996. 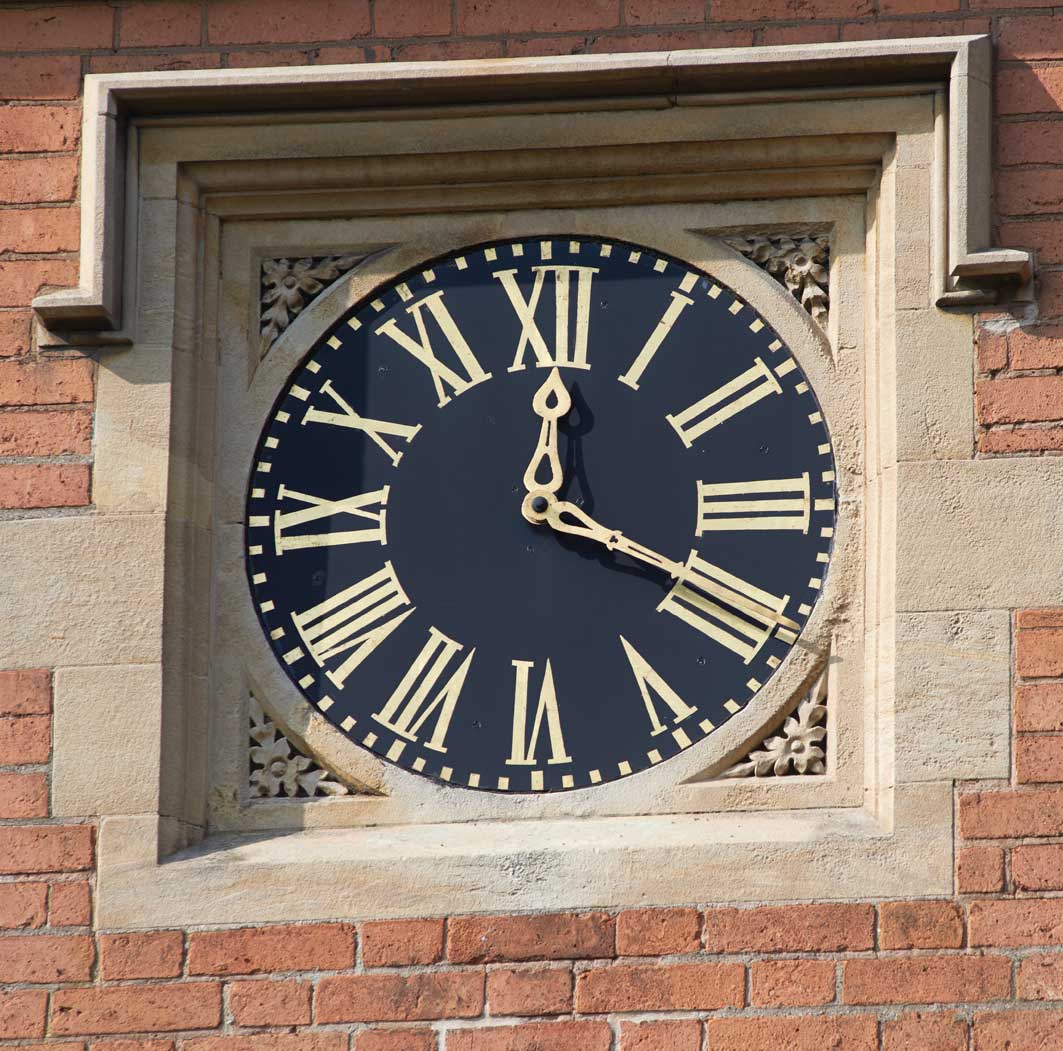 The clock in the Clock Tower was made by William Thomas, Lincoln, and is dated 1858. The clock is of bird-cage wrought iron construction, having two trains, a recoil escapement and shows the time externally on a single adjacent dial and strikes the hours only on a single bell above. The original clock was wound up manually.

In 1996, it was decided to install an automatic winding system. It was considered that the conservation of the clock in its original form was of prior importance and any modification carried out should not be irreversible. Mr John Ablott of Alkborough, Scunthorpe, was consulted and suggested a suitable automatic system that, if desired in the future, could be removed quite easily and the clock could again be wound up manually. 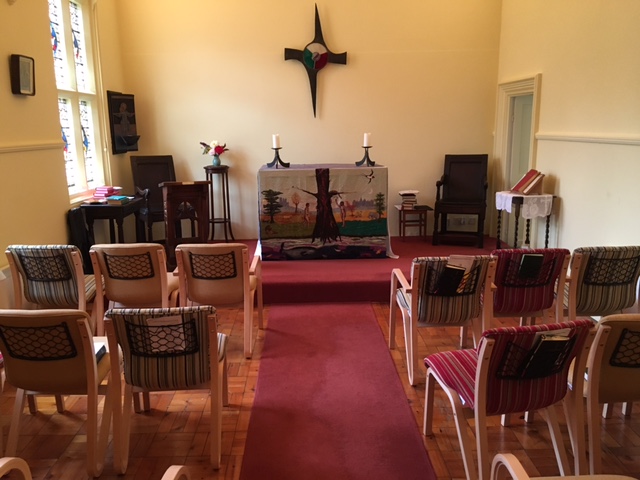 The Chapel is used for daily worship and to celebrate important dates in the Church calendar.

Ceiling. The ceiling was painted by Mr Jack Jones, of Brant Broughton, Nr Lincoln in 1990.

Altar Frontal and Hanging (The Benedicite Hangings) Ms Jacquie Binns, of London, was commissioned by Trinity Hospital in October 1991 to design and create the altar frontal and hanging. The work depicts the development of created order out of darkness, and incorporates the Tree of Knowledge and Adam and Eve. The 'Benedicite' hangings were completed in the summer of 1992 and dedicated at a service in the Chapel on the Feast of the Transfiguration, 6 August 1992.

The Trinity Aumbry. The Aumbry cover was designed and made for this Chapel by Lincoln craftswoman Caroline Mattaei. The design worked on copper, shows the powerfully-legged figure of God the Father supporting the patinated figure of the Christ lit by a light in an oak bowl, itself resting against a copper background. The oak comes from timber taken from Lincoln Cathedral roof and all the work on the wooden base has been done by David Crawford-Thomson, the well known Woodhall craftsman. The icon-like figures have been worked on metal using jewellers' techniques developed by Mrs Matthaei. The Aumbry cover was dedicated at a service in the Chapel on Friday 17 October 1999.

“The Virgin of Kazan”. A late XIX century Russian icon. The Ocklad in gilded white metal, probably silver. The whole contained in a stepped gilt frame with a Victorian stained and mahogany veneer outer case.

Cross and Candlesticks. The wall mounted Cross and altar candlesticks were made by Bob Oakes, blacksmith at Cold Hanworth Forge, Welton, Lincoln in March 2008.

The Audit Room was originally used to collect the half-yearly estate rents. However, with the arrival of modern banking practices, rent days are no longer held and for some time the Audit Room has been used for social events, such as the Epiphany and Trinity Feasts.

Stained Glass Window. One striking feature of the room is the stained glass window. The following is taken from Bailiff Edwin Wilmshurst‟s Scrapbook kept in the Estate Office:

“About AD 1860, happening to be in the city of York and having then as apprentice a nephew of the Lord Mayor Alderman Wilberforce, I enquired where I was likely to obtain any very old stained glass from old mansions, guild halls or churches and was directed to old Mr Hartley, aged 78, the Principle Artist in Glass close to the Cathedral (who was father-in-law to the Lord Mayor). He took me into one of his workshops and showed me in a waste box a lot of dirty broken glass, the accumulation of years. I bargained and bought the lot.

On getting it to Retford I attempted to sort it but it was so encrusted with mortar, old putty, tar and archaic dirt that I could not make out patterns or even colours and then only sorted it in to 7 wood boxes and put it away until less engaged. Business, second marriage, Town affairs so engaged me for many years that it reposed undisturbed for future investigation.

In 1908, retired from business, 75 years of age and less active for any out door work I thought I would look it over.

For many months, 2 - 3 hours a day, I was engaged washing, scrubbing and pumice stoning some 3,000 separate small pieces of glass. I had to use acid to get off the corrosion and weather of centuries but when done I was rewarded by finding I had good and rare specimens of the best school of York glass, a noted place of medieval art.

It was very mixed: some ecclesiastical from church windows, some from nobility’s town houses in medieval York, some secular from Public buildings, Early and Late Gothic, some of the Renaissance Age, some later still and a mixture of Glass of XIV, XV, XVI, XVII and XVIII centuries and some even of the XIX century.

Some 30 years ago a friend, who had a private oratory, on leaving Retford gave me an Angel in modern glass but a good copy of the antique.

After spending in all quite 12 months labour on a very unpromising original collection I have arranged it to the best of my ability so that colours, style or design very much clashes with the ensemble. Following the advice and instructions of the art critic MR RUSKIN in his celebrated STONES OF VENICE in which he states as an axiom that TRUE ART consists of taking a common material and converting it in to a joy for ever, as did the Venetians who in their galleys, as ballast home from the rich cities of ASIA MINOR, brought back ruined columns, marble ceilings which their artists cleaned sorted arranged anew.”

The stained glass was put in to the Audit Room by William Spurr, Plumber and Glazier of Churchgate, Retford at a cost of £20 – 6s – 7½d. Edwin Wilmshurst had made stiff paper templates to act as a guide to getting the size right. A small panel of stained glass was also put into the Matron's sitting room window.

In 2000 it was decided the time had come to have the stained glass panels cleaned and restored and the Bailiff engaged the services of Mark Bambrough, a well renowned stained glass restorer. Mr Bambrough removed all the panels to his Glasgow workshop and over the next eighteen months carefully cleaned the 3000 separate pieces and then reassembled the panels. During restoration Mr Bambrough discovered that some of the glass was medieval. Because medieval glass is rare, the "Trinity window‟ has been recorded in the European and British Register. When the panels were reinstated, an outer window, created by Mr Bambrough and matching the originals, was installed to protect the fine glass from the elements. 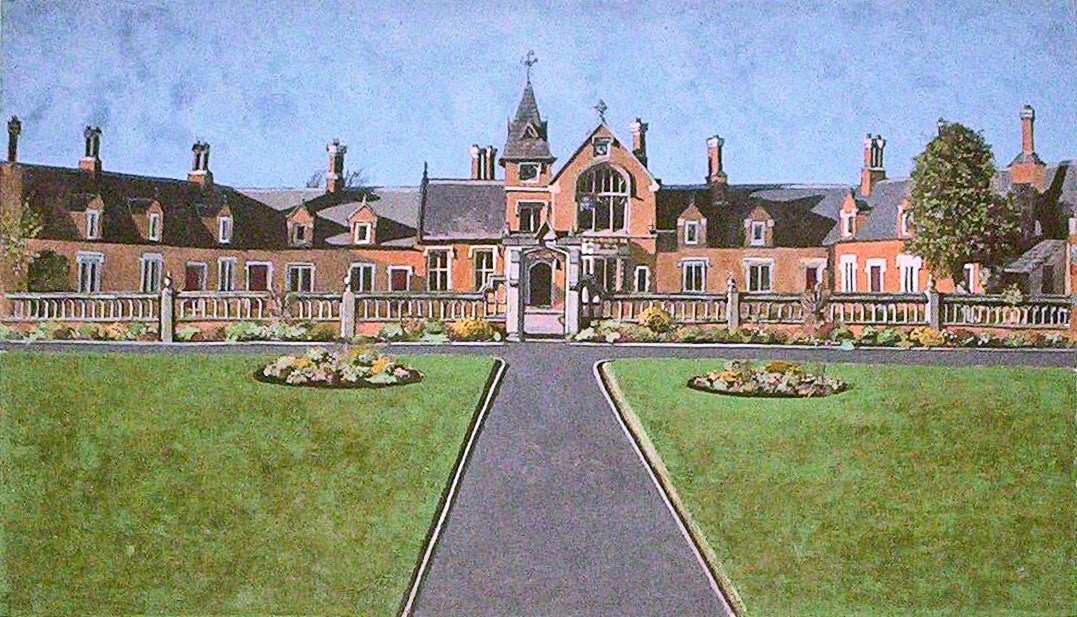 The Queen Anne Painting. The painting of Queen Anne was cleaned and restored in 1999. An appraisal of the painting was made by an art expert from Phillips, International Auctioneers and Valuers. Although no signature can be found, it is thought that the painting can be attributed to Sir Godfrey Kneller, a well-know royal portrait painter during Queen Anne's reign.

Ms Baumann was born in Warsaw Poland and has lived in England since 1971. She graduated BA in Fine Art from Newcastle University in 1978 and was awarded an MA in the History of Art, First Class Honours and Distinction in 1980. She has held solo Exhibitions in London, Saudi Arabia, Lincoln, Leeds, Cornwall, Los Angeles and many other places.

The Mace. It is thought that the Mace is of Victorian origin. It is carried by the Overseer at major functions held at the Hospital.

The gardens are maintained by local contractors who are continually developing the borders, flower bed and landscaping according to the season at both the front and rear of the building. They are often assisted by the brethren, many of whom have a keen interest in gardening. 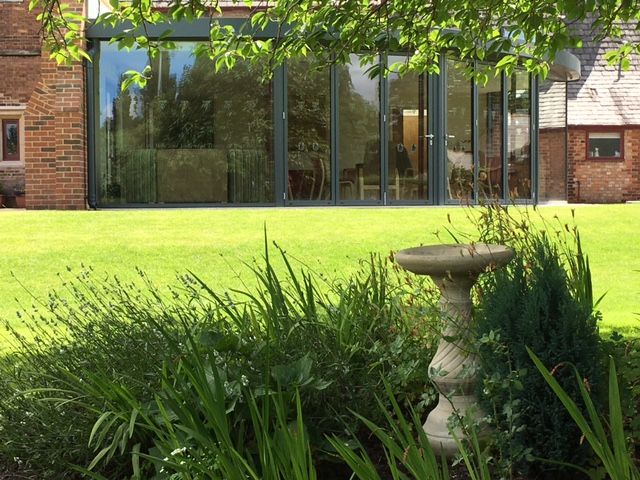 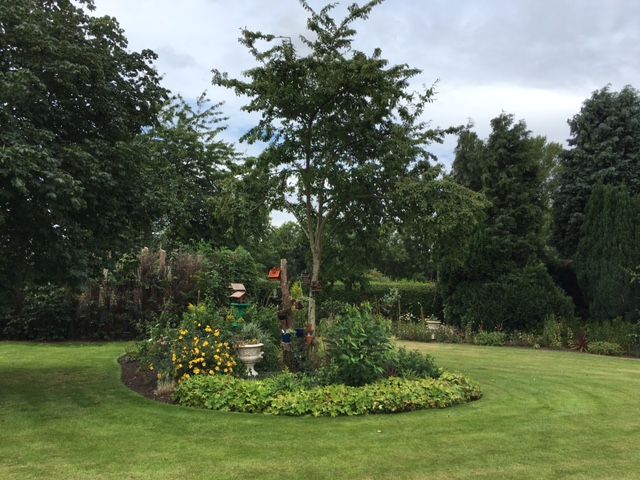 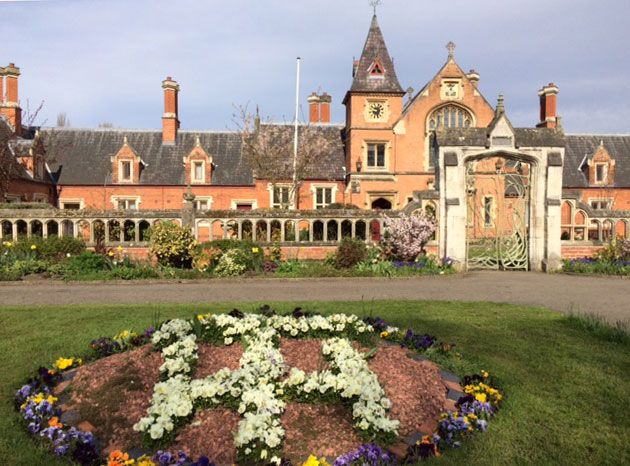 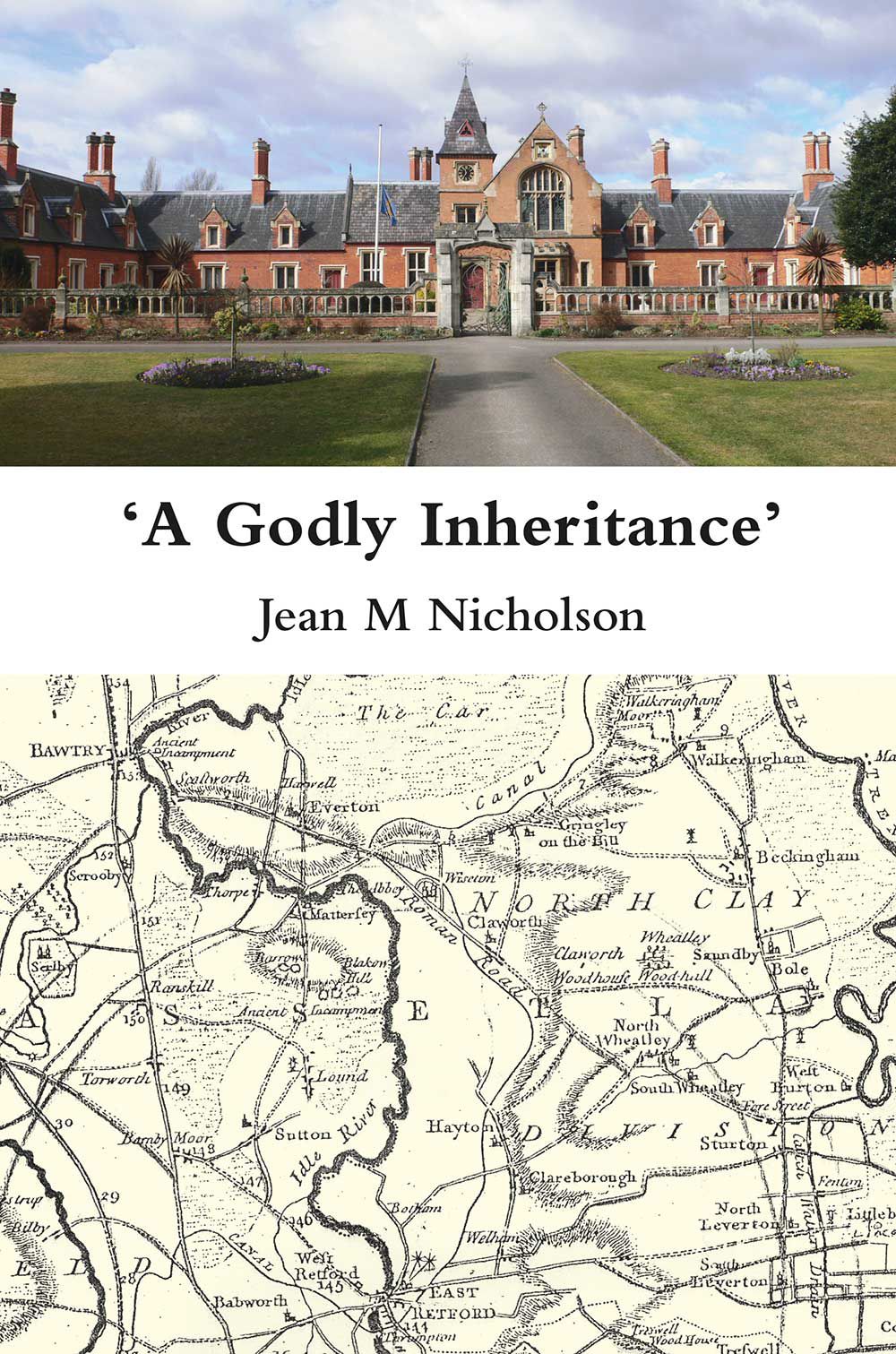 You can take a look at our properties we have to let.

Online application form for admission as a Brother of Trinity Hospital. Click here.

Built with gusto by CREATEINN